At Viuda de Sainz we are aware that, in the infrastructure construction and maintenance sector, research, development and innovation are key factors for the future of our activity.

Our R&D&I department works actively towards the implementation of all the improvements offered by technology. We devise and execute our work in an Industry 4.0 and BIM methodology environment. And we participate actively in forums and projects in search of innovative solutions.

In autumn 2021, the DIGICALM project – Digital analysis of data for the improvement of traffic calming during the execution of works – was submitted to the Call for Subsidies for the Promotion of Innovation in Road Infrastructures 2021 of the Provincial Council of Bizkaia. This proposal was approved and the project was included in file 5/12/IV/2020/00001.

The project consists of the development of an automated digital system that allows data to be downloaded from the devices located on site to the software and, after analysis, makes a series of recommendations on the most effective traffic calming measures on site. This solution will also allow us to analyse whether the measures adopted are effective and to what degree, as well as to monitor their effectiveness in order to be able to modify them if necessary. 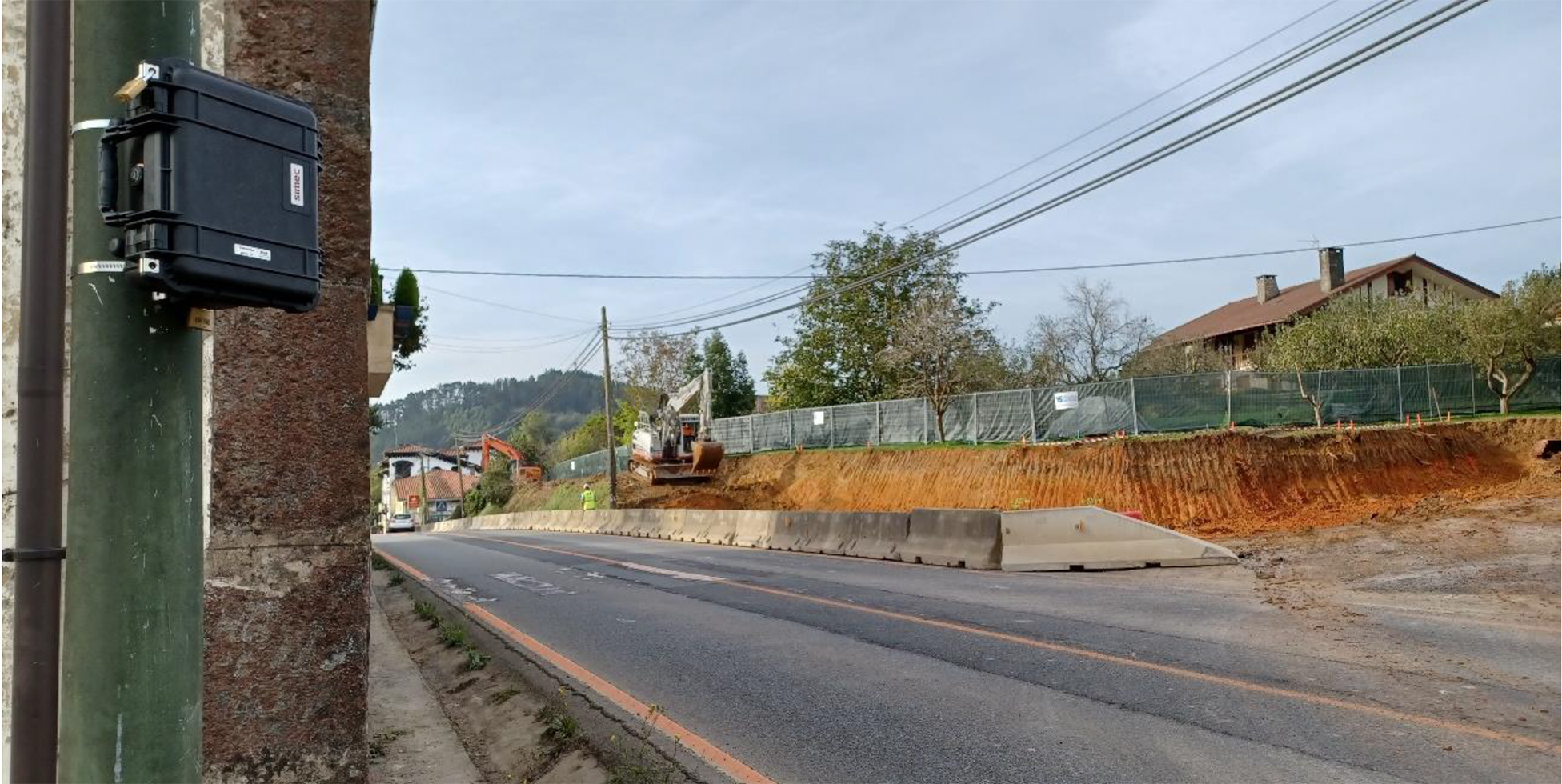 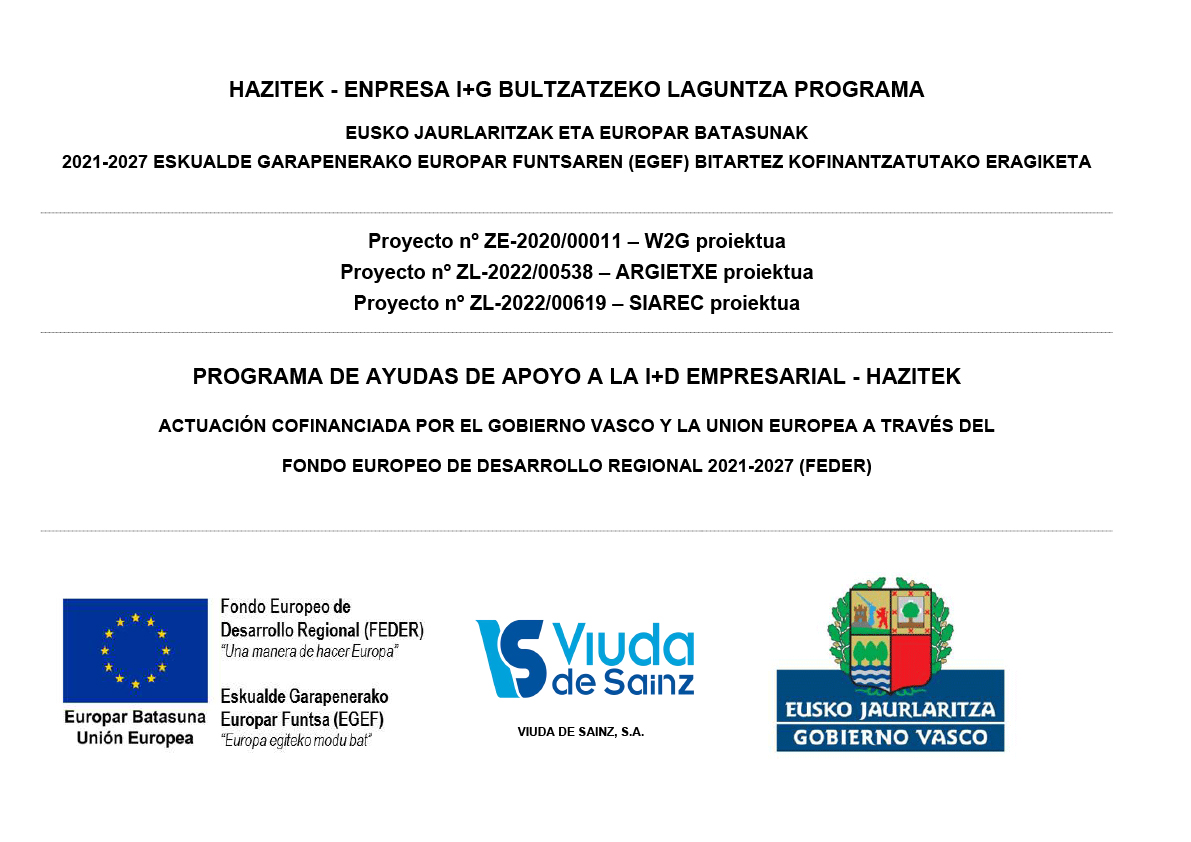 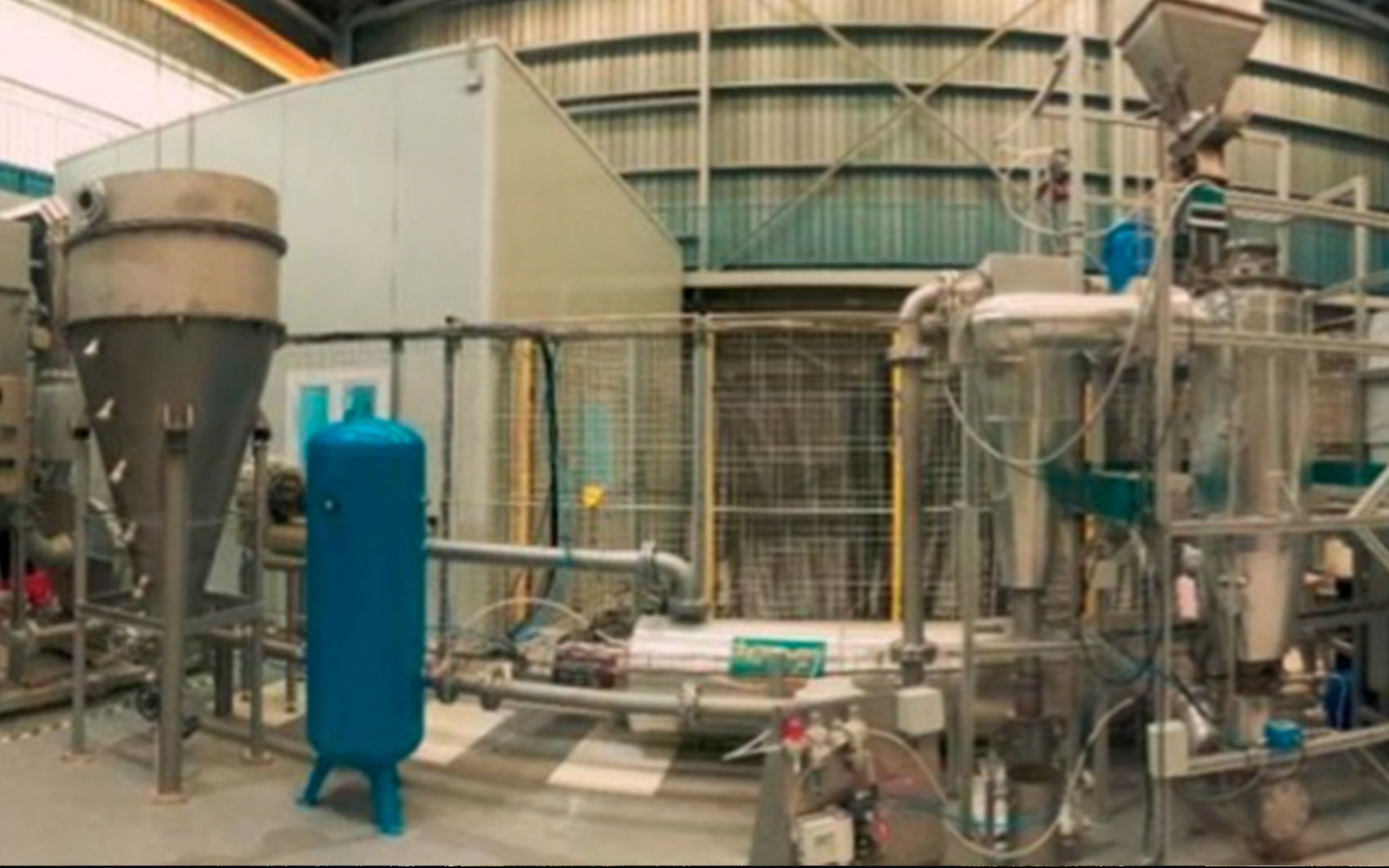 The construction sector, especially the cement and concrete sector, presents one of the greatest challenges of adaptation and improvement to reduce greenhouse emissions and improve the circular economy.
Since 2021 we are part of the SIAEREC project, which consists of the development of Innovative High Efficiency Solutions for the Reduction of CO2 Emissions in the manufacturing processes of cement-based products under a cycle closure approach of ubiquitous mineral phases with latent hydraulic and pozzolanic properties.
This highly efficient and cost-effective technology will allow the valorization of waste fractions of CDW (concrete and mixed aggregates and sludge from quarry and concrete plant washing) so far disposed in landfills for their potential use as activated additions for the cement sector and improved aggregates for concrete manufacturing.

The construction sector is one of the key sectors in the European Union’s circular economy action plan, as construction and demolition waste accounts for more than one third of total waste generation. In order to develop and demonstrate, along the entire value chain, new, circular and economically viable solutions for a more efficient recovery of secondary raw materials for the construction sector from construction and demolition waste, ICEBERG was created.  Over the four-year duration of this research, starting in 2020, new construction products will be developed that will contain between 30 and 100% high-purity recycled materials. The aim is to develop, among others, eco-cements and eco-concretes, ultra-light concretes, ceramic products with less embedded energy (up to 40% less), wood fiber insulating panels, etc. It will also contribute to creating awareness of circularity among the different stakeholders: local authorities, professionals, students and users of construction products.  In this project, Viuda de Sainz will collaborate by providing its experience in the handling and treatment of CDW, also offering use cases to demonstrate the viability of some of these products.   A consortium of 35 partners from 10 European countries will be responsible for carrying out this project, which is funded by the European Union’s Horizon 2020 research and development program (No. 869336) and led by Tecnalia Research & Innovation Foundation.

Our Ecobridge, designed and executed within the extension works of the Metropolitan South Bypass, is a project fully carried out by our R&D&I department. A patented solution that has enabled us to minimize the environmental impact of the works.
The main characteristic that makes this bridge an important innovation is that it can be easily transported, disassembled and reused in multiple locations without it losing its properties. This project has been designed to be dismantled and reassembled whenever it is necessary and presents an important environmental advantage with respect to the equivalent traditional solutions.
With IHOBE’s guidance, we have estimated, in a comparative life-cycle assessment, that the design of the Ecobridge has a global warming improvement potential of 77% as compared to equivalent reinforced concrete solutions.
Due to its characteristics, our Ecobridge received the Quality Innovation Award Euskadi 2020 in the Circular Economy category. Moreover, we were finalists in the international section of this award, where we competed with 500 other candidates.

The housing development we are working on in Bilbao, Kosta Zabala, has been awarded the HQE certificate.
Awarded by Tecnalia, this is the first certification achieved by a block of flats in the whole of the State.
This rigorous testing assesses the energy, environmental, health and comfort impact of a building. It guarantees healthy housing with a high level of comfort for people.
A good job by our R&D&I Department. 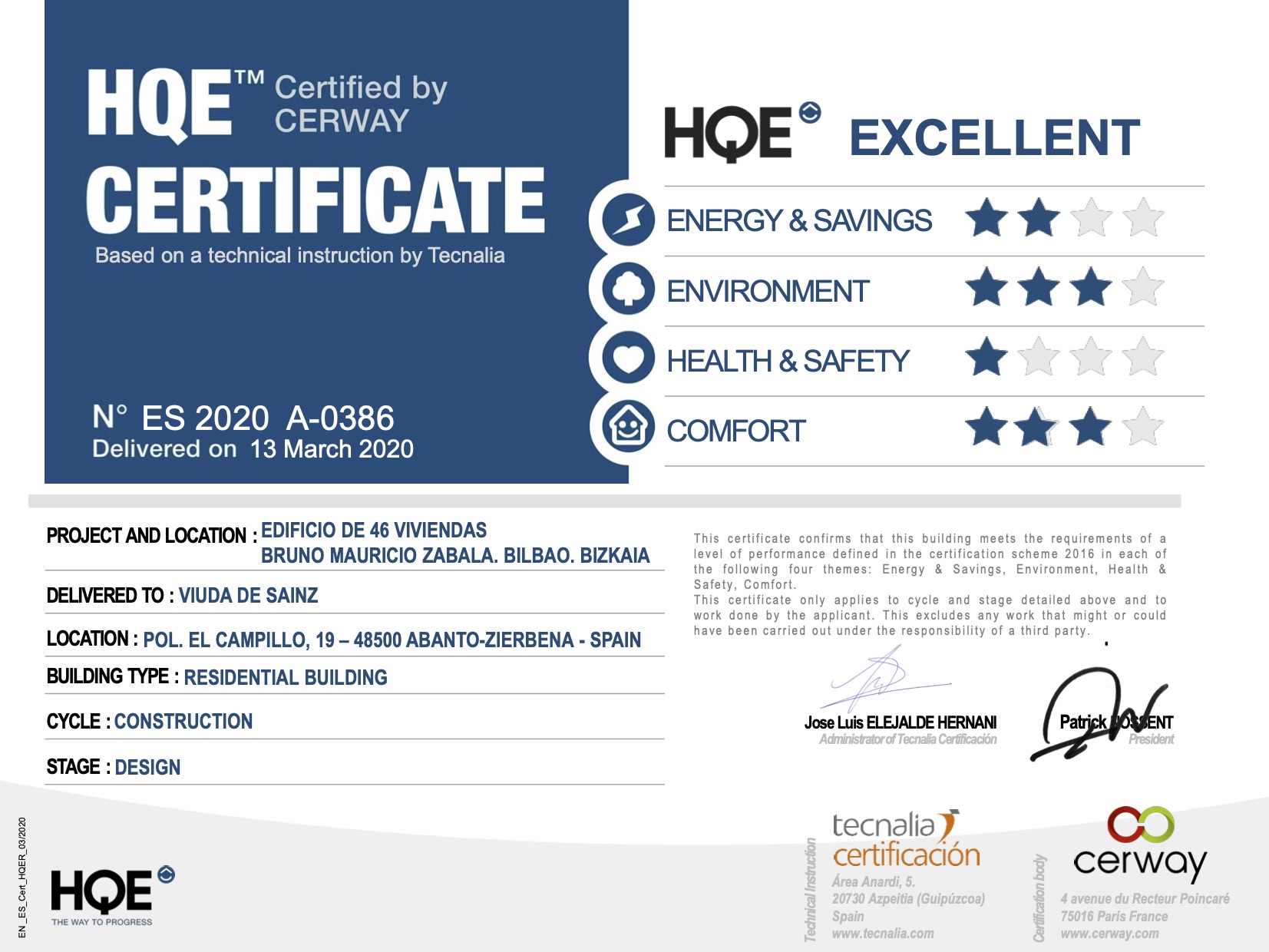 Presentation of the technical solution implemented in the extension of the South Metropolitan Bypass at the exhibition “20 Years of Ecodesign Made in Euskadi” within the Basque Ecodesing Meeting 2020.
An ecobridge designed and built with environmental criteria. It is enabling us to considerably reduce the acoustic and visual impact as well as the CO2 emissions of this work. 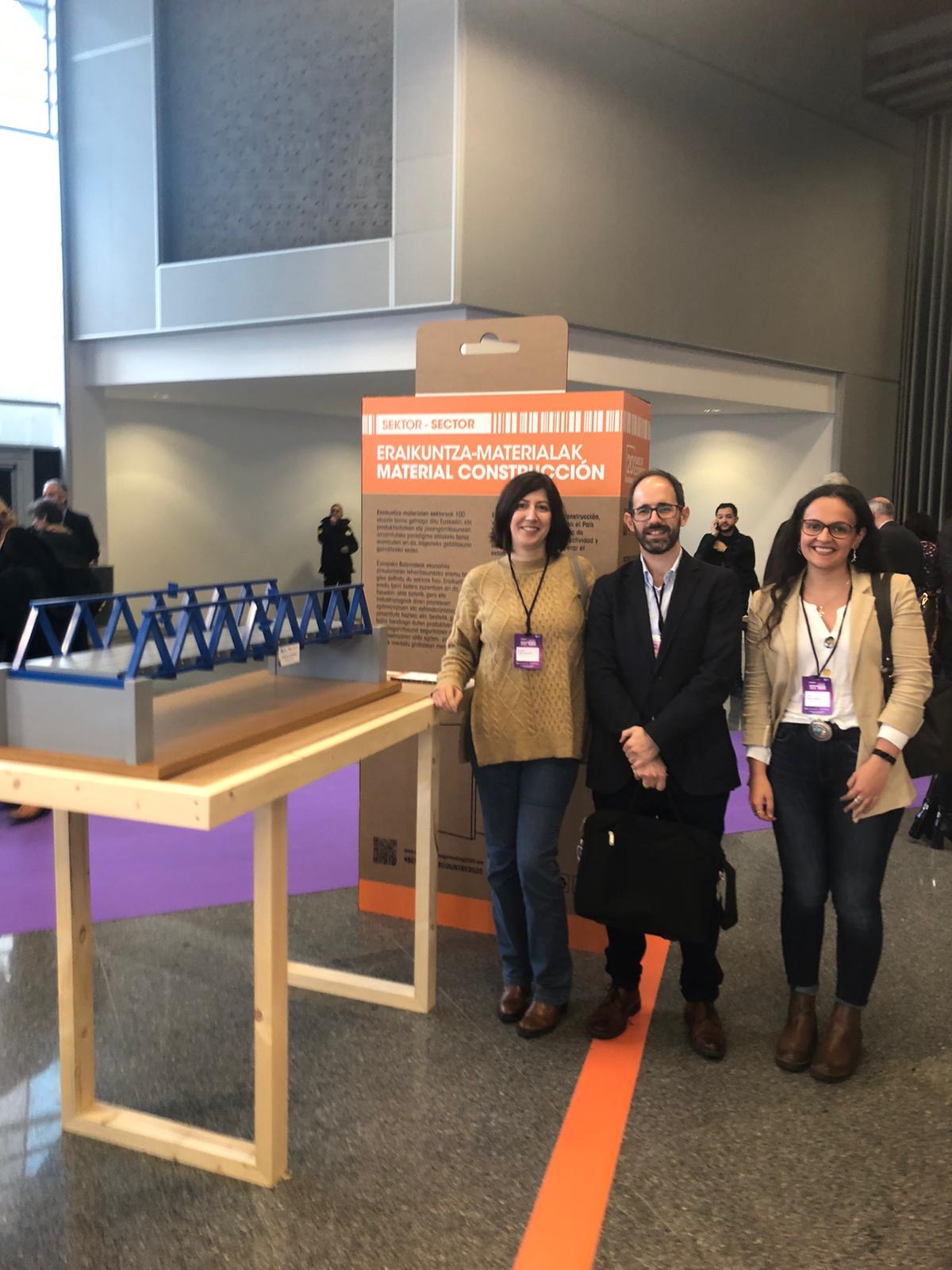 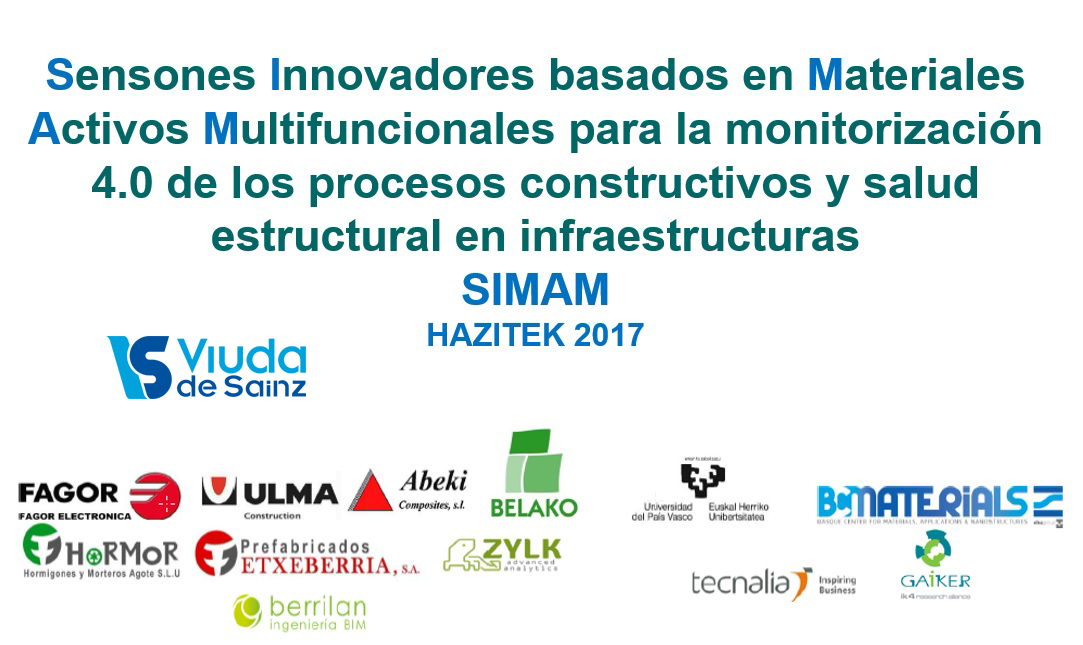 PARTICIPATION IN THE ÍMPETU PROJECT - OPTIMIZATION OF PRIMARY WATERPROOFING IN TUNNELS 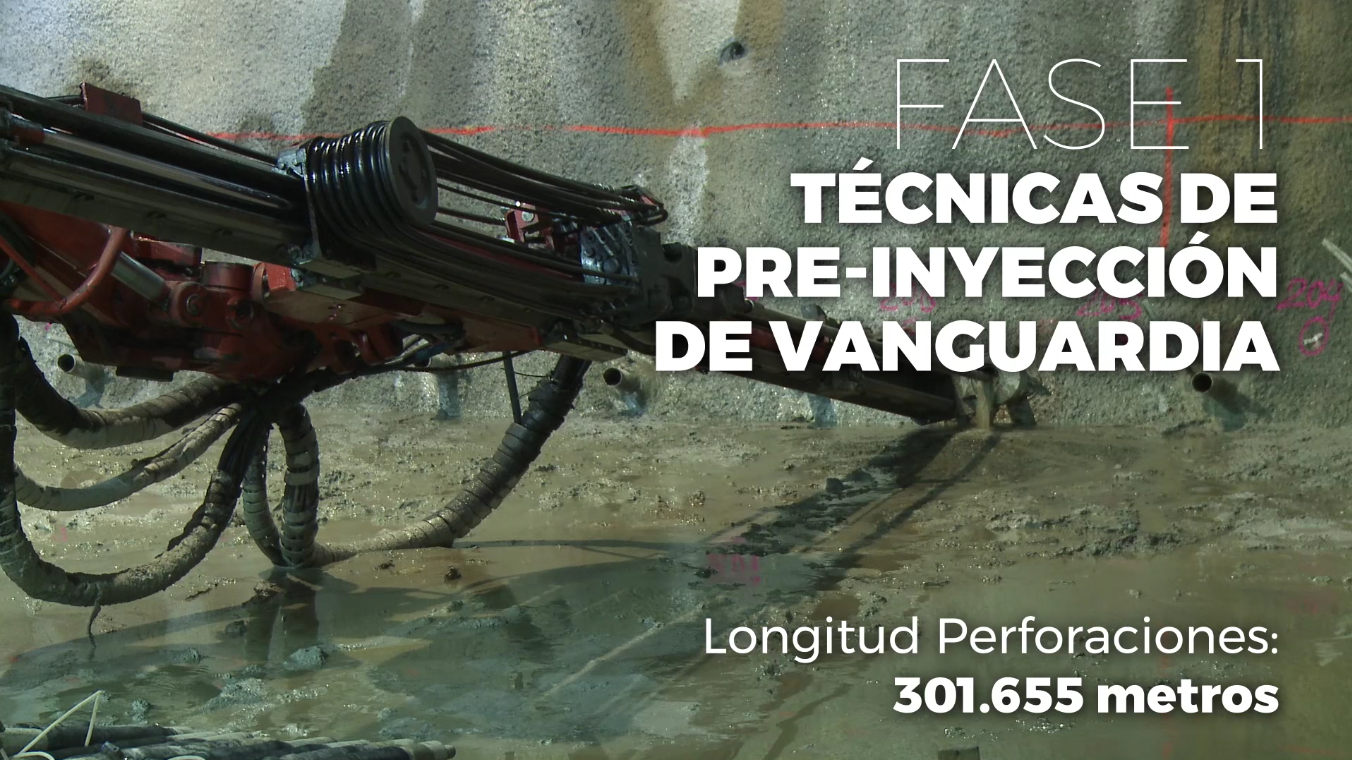 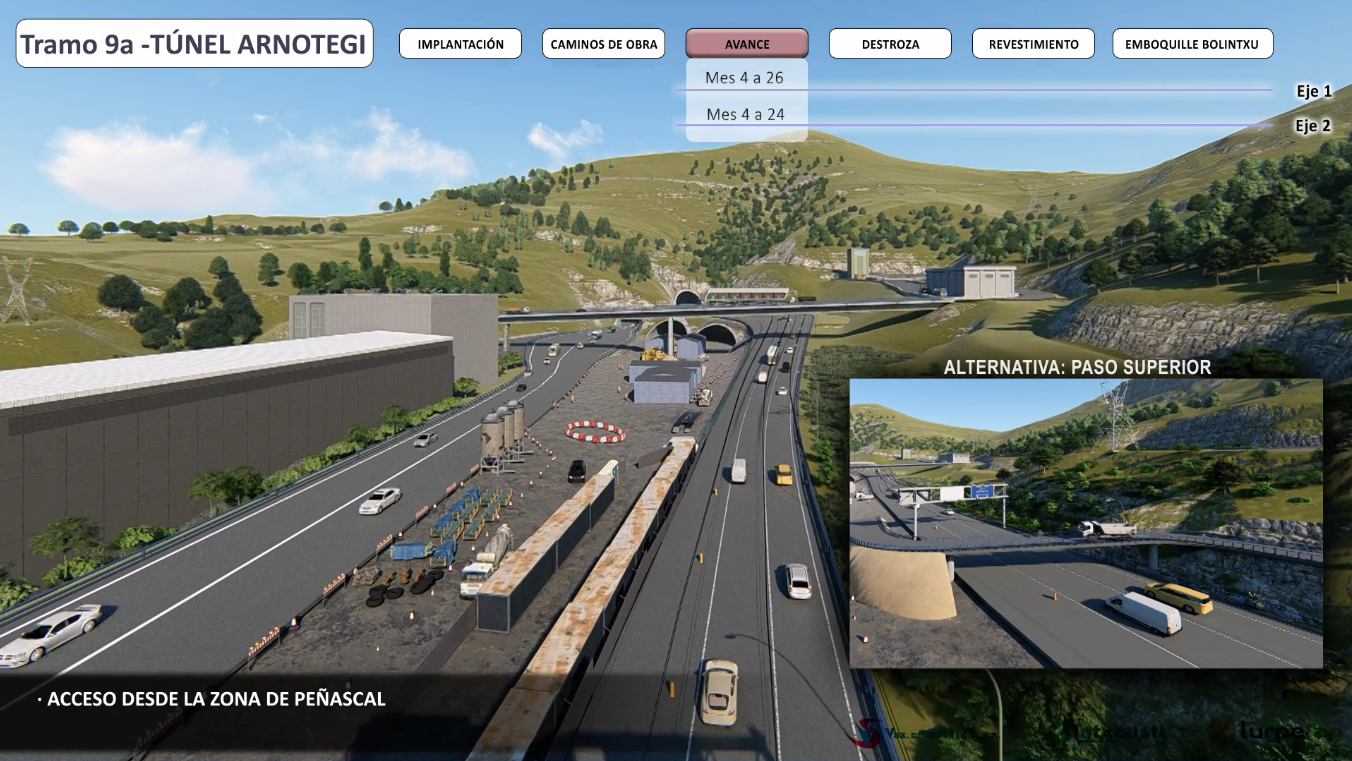