The real estate operation in the area occupied by CLH and that houses the “Residencial Itsasalde” urbanization is the most important in the history of the municipality. According to El Correo newspaper, ninety owners have already registered their apartments of the first block that is being built in the old lands of CLH, where there will be the highest promotion of Social Housing in the locality. 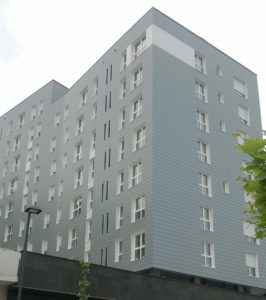 As reported by the Biscayne newspaper, “the new neighborhood of Santurtzi has already begun to receive its first owners. A new development, Residencial Itsasalde, which since the end of 2014 has been built in the old lands of the fuel giant and Hydrocarbons CLH and which includes the construction of 570 homes -427 Social Housing- distributed in seven buildings, in addition to 63,000 meters of green areas, being the most important real estate development and regeneration operation in the history of the locality.

According to local sources that have confirmed to the newspaper, “the neighbors of the municipality who were granted after the drawing on November 2011 with an Social apartment in the first block, built by the promoter Vda. De Sainz and which houses a total of 111 apartments, they have already been given the keys.

“The same sources consulted say that ninety of the owners “already have already registered their new homes in a process that began last month, while the rest will do so in the coming weeks. All the apartments have the occupation license, so some moves have already begun”.

The completion of this building, which also has 111 garages, 83 storerooms and a commercial market of 1,100 square meters – for now, empty – and another 48 parking spaces, allows a dormant land to be recovered and an area formerly occupied by old and robust tanks, making of it an unattractive and disconnected print in its entirety of the municipality.

With this transformation, the lower area of Mamariga looks again to Santurtzi to become a beautiful residential area overlooking the Abra and 8 minutes walk from the heart of the village.It should also be remembered that this is the first social houses in decades, an old demand of the municipality.

The drawing of this first property was the first to be held in twelve years. Between 2001 and 2007, out of the 2,378 apartments built in the coastal town, only 133 were social houses. In fact, the previous draw had taken place in 1999 for the houses of Camino de los Hoyos, in Kabiezes.

In Santurtzi, the land for construction is very limited, so the site of CLH, once dismantled, seemed like the only option to build.

“The point that the CLH area has already families living since this month is very good news. It is a step further in the matter of sheltered housing, giving little by little compliance with one of our commitments, that of promoting those areas of social housing such as CLH, San Juan or La Cantera », states in El Correo Estibaliz Olabarri, councilor of Urbanism .??Second and third blocks. While the first neighbors arrive, mostly young people, the rest of the project continues with the construction of two other buildings.

On the one hand, the fixed price housing – also marketed by Viuda de Sainz-, which is being built, in particular, one of its portals, with 26 apartments. The works are progressing well and, according to the deadlines, they will be finalized on May. For its part, Jaureguizar already has the third building ready and will be on March, approximately, when the Consistory grants the license of first occupation.

2017 will be, therefore, an important year for this transformative action, since it is expected that the municipal parcel that is still unsold will be put out to tender, something for which there is still no date. In this way, the bases for the construction of the fourth building of the seven of which the project is composed would be laid. At the same time, the urbanization of the area already built is finished and it has the urban furniture and the different systems of lighting and sanitation.