Needless to fish in deep waters of the collective memory to recall the most natural disaster of Biscay. On the morning of August 26th, 1983, the rivers of Biscay removed the muds of its banks and shook the Basque stability. 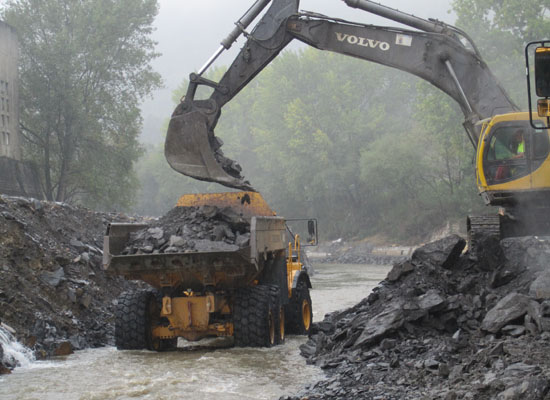 That date marked a before and after in the water policy. It was turning point that led to solid and sophisticated engineering projects aimed at relieve the pressure of the river and its infrastructure and to lay a degree of tranquility.

On the morning from August 26th to 27th, 1983, during the final stretch of the Great Week, which is now preparing for a new edition, it was dramatic. The market of La Rivera was reduced to rubble and mud and the “txosnas” of the festivities became a jumble of dilapidated iron along with a “Marijaia” that was crushed against the Arenal kiosk. The end of the Festivities marked the beginning of a recovery, founded on new mentalities.

The overflow of the rivers caused by the conjunction of a number of meteorological factors forced to cut off the roads and much of the Province remained dark and without telephone due to the behavior of the rivers and their tributaries.

After August 26th, the rescue was the main task of firefighters, police, army and hundreds of volunteers who offered to help every day. Around 6,000 people participated in the rescue efforts in Biscay and thanks to them, the death toll did not rise. The most positive reading was that tested the generosity of Biscayne people, they passed the exam with excellence, but there was another test to pass, so the slogan was to avoid at all cost a new tragedy and fight by technical means the force of nature.

When the tide joined the waterspout, the Ibaizabal´s basin overflowed five meters in various points of Biscay. Here, the inhabitants of the towns of Basauri and Galdako also suffered the devastating effects of flooding.

Aware of a casuistry of the Basque geography and the human action, and to counter the phenomenon of river flood, the Basque Water Agency, URA, set to work consolidating policies based on the combination of measures, not structural, (management uses depending on the degree of flooding, hydrological information systems and early warning systems, civil protection measures, etc.) and structural measures, only in consolidated urban areas under risk.

To carry out its mission, there are specialized companies in the assigned tasks, including the company, Viuda de Sainz that after finishing the work on the updated draft of the channeling of river Nervión-Ibaizabal in the tranche Basauri-Galdakao Phase I of the Interceptor Nervión-Ibaizabal; Tranche Urbi Bolueta-Phase II, now, is undertaking the Project of the Interceptor Nervión – Ibaizabal. Tranche Bolueta-Urbi (phase 2).

These new actions to channel the rivers Ibaizabal and Nervión in the stretch Urbi-Bengoetxe affect a total length of 1,570 meters and have a budget of 6.578.093,66 euros; the implementation period is estimated in 20 months.

The rivers Ibaizabal and Nervión have had critical moments for their hydraulic failure, which is manifested in their banks that have been partially occupied and that the river has been squashed.

The project that Viuda de Sainz is carrying out in this area of ??the Biscay region of Nervión-Ibaizabal tries to respond to the urban needs of the moment; needs that did not foresee the natural behavior of the river in flood period with the observed result of frequent flooding in the area that this channeling project seeks to significantly reduce.

Prior to the implementation of the project, there have conducted studies and works done previously by the Water Administration. It has also taken into account the information gathered by the respective municipalities and collected by the companies located in the margins of both channels as well as the derivative of the topographic and geotechnical analyzes. It was also carried out a hydraulic analysis of the status of the channel in order to determine its ability to drain and quantify the effect on the water of specific obstacles in certain moments.

Because of the study, the necessary actions were divided into three different phases (Tranche Bolueta-Urbi, Tranche Urbi-Bengoetxe and Tranche-Plazakoetxe Bengoetxe). In this second phase, the following actions for the channeling of the river Ibaizabal will be carried out from Urbi to Bengoetxe.

The Firestone Bridge has a reinforced-concrete deck that relies on the running boards and a pile in the center of the channel. This bridge will be replaced by a single span consisting of two curved beams trough guideline and a total length of 41.10.

• Demolition of the Urbi Weir

A new one of lesser height will replace it and it will be carried out the construction of a weir at the end of the section, immediately downstream of the weir of Bengoetxe
.
• Environmental restoration

The channelization project also includes the replacement of the existing easements, roads, steps and all those services that may be affected and in general, all the ancillary and additional works required, not only to secure the main hydraulic function, but also those which impact on the land use and serve to minimize the environmental impact.

The Basque Water AGENCY-URA- and the governing body of the City of Laudio also face the future channeling of the Nerbioi on its way through this town with which it will be recurrently increased the hydraulic safety for floods affecting the town.

The channelization project in Laudio is one of the most important to realize in the whole Basque Country in flood management actions. In compliance with the European Directive of 2007 about the assessment and management of flood risk, URA (along with other Administrations) conducted a Preliminary Assessment of Flood Risk or “EPRI” with which it were determined the areas with more risk of flooding. That is, those territories where there is a greater likelihood of these phenomena and with which it can produce the greatest effects on people, property and infrastructure.

This analysis helped to confirm the vulnerability of our land to flooding and determined that there are 100 areas in the Basque Country which offer the greatest risk, and that are mainly located in the Cantabrian Region. On of these samples the area of the Nerbioi on its way through Laudio, which will develop the future work, is part of one of these hundred ARPSIS (Areas of Potential Significant Flood Risk) in the Basque Country. And along with the rest of the ARPSIS, ithere will be by the end of 2015 a specific management plan of Flood Risk in which it will be included all the necessary measures to increase the security against floods in Laudio. Measures that include both structural measures -such as the case of the future Channeling- as other non-structural ones concerning future territorial arrangements or systems for early warning to citizens.

The Biscayne municipality of Getxo, is carrying out the works for flood protection in another river, the Gobela.

The project will significantly increase the safety against floods in the Errekagane section of the Gobela River in the tranche from the Christobal Valdes street to the Bridge of the Leioa Av. and extends this hydraulic improvement upstream to the area of Etxezuri Larrañazubi.

It consists of expanding the current channel of the Gobela river (the hydraulic section of the current channel is doubled) and the removal or replacement of the obstacles for the circulation of the water-such as bridges and crosses- affects the third phase of the project and has a budget of over 14 million, an execution period of 30 months.