Bilbao has recognized companies and organizations their committed to the defense of the environment, among which is Vda. Sainz for the work to build a more sustainable Bilbao and deal with the consequences of climate change, in particular, to reduce the carbon footprint. 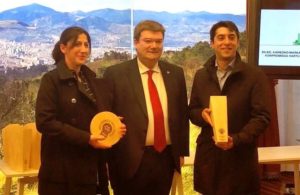 A total of forty companies and organizations of Bilbao participated in the fourth edition of the program “Towards a low carbon strategy in Bilbao, 2015”, promoted by the City Council of Bilbao through Bilbao Ekintza (the municipal company).

This initiative, to which have joined in the last four years 78 SMEs, organizations and institutions, responds to a shared challenge: building a more sustainable Bilbao and deal with the consequences of climate change.

To achieve this objective, it is to combat the carbon footprint, the most harmful pollution trail left in its wake. The ecology encyclopedias define such expression as all the greenhouse gases emitted by direct or indirect effect of an individual, organization, event or product.

The calculation of the carbon footprint provides important benefits, among which they are energy-saving, optimization of the resources, improving competitiveness and strengthening the brand value associated with the environmental and sustainable commitment.

According to Bilbao´s Consistory, the first step to reduce the carbon footprint is to know which the sources of emission of greenhouse gases are. It is, in short, to assess the environmental impact generated by the company or entity, depending on their activity, and define proposals and measures to avoid its consequences.

The variables analyzed in the program launched by the City Council of Bilbao meet the characteristics of each one of the companies and organizations in order to ensure their effectiveness and efficiency. The measurement focuses on aspects such as, among others, energy consumption for air conditioning, heating, lighting, elevators, transportation, travel or commodities.

The findings after the measurements emphasize the awareness, the use of renewable energies and fuels friendly with environment, installing high-efficiency equipment and systems that reduce water consumption, and the commitment to products that reduce emissions associated with transportation.

Within the forty firms that the Consistory has awarded for their involvement in reducing the carbon footprint are: the Villa de Bilbao and Miró Hotels, Bilbao Basket, the Sports Club of Bilbao, Cluster Gaia, the University of Deusto, the School of Engineering of Bilbao and the Schools of Business Studies (UPV / EHU), The construction companies Jauregizar Promotion and Real Estate Management, Excavaciones Vda. Sainz, Construcciones y Promociones Balzola, the Museum of Fine Arts, Gorabide, stores like Decathlon or Mercedes de Miguel.

All these companies have received a wooden statuette, an object that symbolically meant the work of these societies. As the Mayor Juan Maria Aburto explained during the awards ceremony, with this implication, the companies and organizations “gain position and prestige, more customers and business, but also help us to create healthier and more sustainable cities”. “And just why they deserve our appreciation and applause, the thanks of the entire city.” has added.

With this recognition, Vda. Sainz demonstrates that puts its bit to prevent further grow in the number of deaths per year on the planet, which currently stands at 12.6. Poor environmental conditions are responsible, according to a report by the World Health Organization (WHO). This means that about a 23% of deaths in the world are produced by “live or work in unhealthy environments,” according to WHO.

Environmental risk factors such as air pollution, water and soil, exposure to chemicals, climate change and ultraviolet radiation “contribute to more than 100 diseases or trauma,” says this international organization in its study “Disease prevention through healthy environments”.

This is the second edition of this report, part of the data of 2012. The previous study was conducted a decade ago. Maria Neira, director of the Department of Public Health, Environment and Social Determinants of WHO notes that in ten years the percentage of 23% of diseases due to environmental causes has not changed.

But it has changed the type of ailments. “This time, two-thirds of the deaths are due to chronic diseases, such as cardiovascular disease, stroke, cancer or chronic respiratory diseases,” says Neira. In particular, as the study notes, “deaths from non-communicable diseases attributable to air pollution (including exposure to other people’s smoke snuff) have increased to the figure of 8.2 million.”

In the last decade, in parallel, WHO notes that “it has reduced deaths due to infectious diseases such as diarrhea and malaria,” which were linked to poor water quality, sanitation and waste management. It is assumed that after this decrease is “improving access to drinking water and sanitation, as well as immunization, insecticide-treated nets and essential drugs,” says this international organization.

The change in the pattern of diseases caused by environmental problems posed challenges. “Chronic diseases are more costly for a country,” notes Neira when comparing them with infectious. “They have a very high cost to society,” he adds.