The 38th edition of Ibilaldia to be held on Sunday May 29th in Durango under the slogan “Dagigun!” and the Basque Sochools of Kurutziaga and Ibaizabal, responsible for the organization, will claim the support for the FP education in Basque, as only 10% of the training cycles are taught in Basque. 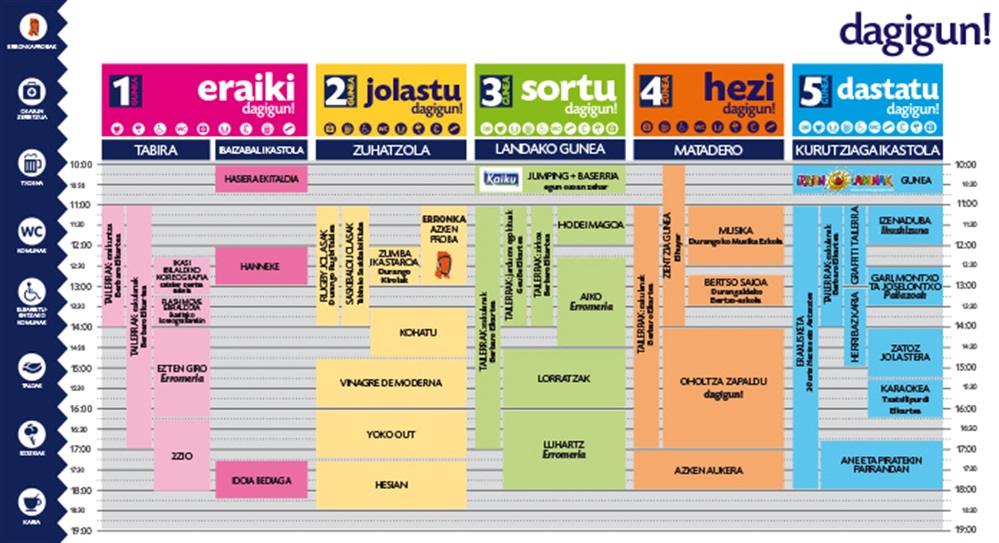 On Sunday, May 29th, the feast of the ikastolas (Basque Schools) of Biscay wants to make visible a problem that has been severed in the great educational debates, the limited presence of the Basque language in the vocational training, FP, with the support of our company.

Currently, the offer of training courses in Basque language does not reach 10% -in Bilbao does not reach the 3% – although seven out of ten new students study in D model. The Fourth grade of the ESO has become a sink of Basque students forced to study the FP in Castilian because they have no alternatives in Basque.

Since 2010, the Harrobia Basque School has opened a window in Bilbao´s neighborhood of San Francisco to all who want to study FP in Basque. The project has taken its first steps with two training courses: Intermediate degree in Computing and Communications and High Level in Physical Activity and Sports. The start could not be better as it currently has 125 students in formal education and more than 500 training for employment.

Harrobia is a strategic project for the Basque Schools of Biscay because that is their trump card for quality FP studies in Basque and because, as happened twenty years ago with the introduction of the D Model, it wants to be the engine of the expansion of Basque in the FP in Biscay.

The Kurutziaga Basque School is a cooperative run by parents in an independent and joint way. With more than 40 years, today the Basque School of Kurutziaga is a Basque education reference model in Durango and its region, which has more than 1,000 students. To achieve its goal of providing quality education, it works continuously improving processes and innovation.

Founded with the aim of offering high school and training cycles, today it has three modes of Bachelor (Social Science, Technological and Scientific), a Higher Cycle (Superior Cycle in Early Childhood Education) and courses subsidized by Lanbide and Hobetuz Foundation . In addition to the educational offer, Ibaizabal Basque School manages other business projects: a hostel, a gym and a bar.